There are two major factors involved in the current Macau slump. One of them is political, the other monetary. Politically, president Xi Jinping continues to crack down hard on “corrupt politicians,” a drive which is certainly hurting the money laundering economy of the VIP market. How much money is being filtered through Macau by Chinese communist party officials is the Trillion Yuan Question, but it is no secret that it is a lot. As far back as 2009, a cable leaked by Wikileaks from the American consulate in Hong Kong to the secretary of state said that “[Macau’s] phenomenal success is based on a formula that facilitates if not encourages money laundering.”

There are two kinds of money laundering though. One is legitimate, meaning people trying to hide their voluntarily-earned money from the government because they don’t feel like giving it to a bunch of politicians. The other is criminal, meaning criminals trying to hide stolen money from being recovered by their victims. Any money laundering done by politicians is almost always criminal, since the money politicians make is never voluntarily earned in the market.

While this is a guess and judging by the precipitous declines in the VIP Macau market since Jinping’s crackdown, I would say that the current declines are a direct result of politicins lacking the ability to launder their money in Macau. It is that group that would have the easiest time laundering large sums of money assuming the State is turning a blind eye, because it is that group of people that is part of the State apparatus itself. Private businessmen would normally have a tougher time doing this even without  aJinpingesque crackdown because private rich people aren’t the State. They are always a target, no matter what the political climate is, whether the president wants to “crack down on corruption” or not.

But the politician-money-laundering factor is a pinpoint problem for Macau rather than systemic, caused by the whims of a politician rather than the larger business cycle. We are still seeing mass market growth in Macau despite disastrous overall numbers slammed by the collapse of the VIPs. The second factor, however, is much more systemic, and indeed has not hit yet. If it did, we’d see major mass market declines in Macau, which we are not yet seeing. Here is a picture of it. 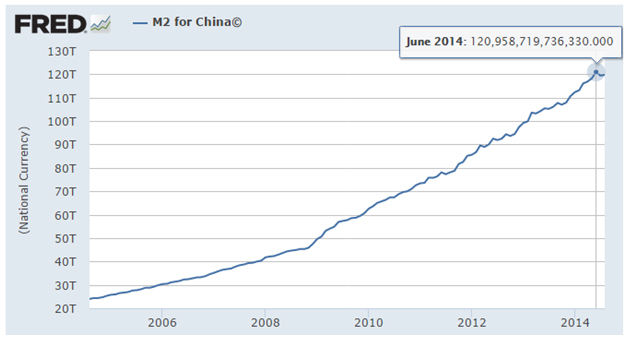 Above is a 10-year chart of the Chinese Yuan supply. From 2004 to late 2008, the slope is pretty constant. As the financial crisis hits, the money supply expands faster as central banks around the world start printing. Throughout this entire period, the declines in money growth have been only extremely short term followed by more growth spurts, and the declines have usually only been expressed as a slowing of the growth rate rather than an absolute shrinkage of the money supply. It’s like Congress when they say they’re going to “cut spending” but they only mean barely slow the rate of increase of spending.

But in June, something happened, and whether it continues or is reversed will determine whether a short term bottom has been hit in Macau. In June, the Yuan supply hit a maximum of 121 trillion. This is from a baseline of 25 trillion in 2004, or an astronomical increase of 384% in 10 years. The yuan supply is now 119.75 trillion, a tiny blip down of 1.1% but when you’re injecting so much money to begin with, any blip down could cause an earthquake.

Will the decline continue? If so, the Macau mass market will start to decline as well, along with the rest of the Chinese economy. Money, after all, is half of every economic transaction. It depends on whether China’s top politicians think they can keep consumer price inflation maintained while printing even more money. Indications are they do not think so. Stimulus in China has not been a broad-based policy for the last 3 years, and any Yuan injection by the People’s Bank of China has been given begrudgingly in amounts only in the billions and in short bursts in response to specific mini-crises. “Only in the billions” may sound a bit facetious, but when the money supply is almost 120 trillion, a few billion is not that much.

What exactly is the evidence that broad-based monetary stimulus has not been China’s policy for over 3 years, besides anecdotal evidence of political speeches and divining political intent from them? 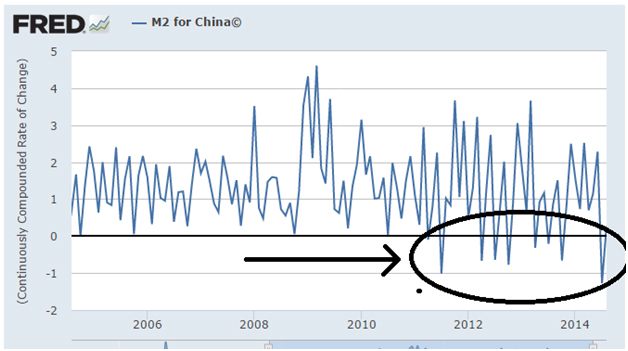 Above is the continuously compounded rate of change of the Yuan supply over the last 10 years. You can find it here. Just change the units from national currency to the compounded rate seen above. From 2004 until July 2011, the rate of change was never, ever, negative, meaning, the Yuan supply never shrunk in absolute terms. (Actually, if you look at a wider chart you’ll see it was never negative going all the way back to 2002.) Now, all the sudden, the Yuan supply’s rate of change has hit negative territory consistently since July 2011, with a new record of -1.276% in July 2014. If this monetary trend continues, the bottom for Macau is not yet in.

Personally, I don’t believe it is possible for China to keep expanding its money supply without suffering serious consumer price inflation. The PBOC will have to keep on its current course of monetary conservatism, which means the punch bowl is being taken away. In the best case scenario, the Macau mass market will show slow to anemic growth while Jinping continues to arrest politician money launderers and stuffing them in taxpayer-funded luxury prisons.

95 trillion Yuan have been printed in 10 years in China. The printing is finally stopping now. The VIP market and Jinping’s crackdown is just a pintpoint migraine for Macau. The real bottom will only be in when investors panic on the mass market, too. We’re not there yet. Keep your eye on the Yuan supply and Jinping’s mood, and stay short.