Monetary developments over the last three weeks have been very interesting, both on the inflation front, meaning the amount of actual dollars circulating, as well as the price inflation front, meaning how that inflation affects prices. The combined developments on both fronts tell me that we are about to have another leg of boom in the US economy. Judging by our MGM proxy in gauging the business cycle, we don’t have a 10Q yet to verify exact numbers, but according the latest earnings call, volumes at MGM are pushing record highs and still climbing.

First, an outline of the current monetary situation, then we’ll move to how it may affect the capital markets, particularly Las Vegas.

After stalling for 25 weeks, the money supply as measured by M2 (deposits, savings, circulating cash, plus small denomination time deposits) is finally on its way up again. Three weeks ago M2 finally broke decisively through the $11.5T mark and has stayed there for 3 weeks now. We are currently at $11.53T from $11.4T on September 29th. So as not to underestimate due to a deceptive decimal point, that translates to $130B pumped into the economy in 3 weeks. That money has to go somewhere. Where is it going?

Take a look at the MIT Billion Prices Index and you’ll see that the current monthly inflation rate is negative 0.341%, which translates to an annual price deflation rate of over 4%. In the midst of all this money printing or actual monetary inflation, prices are actually falling by 4% at the current rate. This is simply amazing. The MIT Billion Prices Index works through zombie computers gathering up online pricing data and compiling it daily over a 30 day period. It’s like the CPI on steroids with a vastly superior basket of goods to measure. What is even more amazing than the number itself however is that never in the history of the index have prices dropped this fast outside of the 2008 financial crisis. (To be fair, the index was only founded in 2008.) The record monthly rate is -1.2% set on October 23rd 2008, or a 14.4% annual deflation rate.

The point is, the new money is emphatically NOT going into the consumer sector right now, so it must be continuing to pour into the capital goods sector, AKA the stock market and production.
Further, the US dollar continues to soar, with the index hitting a 4 year high, and only 1.1 points away from exceeding its 2010 high of 88.4. 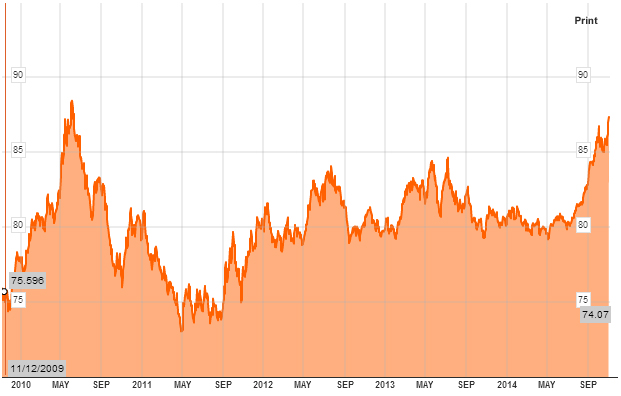 A combination of lower consumer prices, monetary growth, and a higher dollar index are the perfect setting for another leg up in this boom. As money pours into the stock market and prices fall, the willingness to spend money rises, greasing the boom still further until the point where price inflation becomes obvious. So as long as price inflation remains subdued, there is room for the boom to run.

I have until now been purposely ignoring the vaunted “End of Quantitative Easing” because it is a red herring. The Federal Reserve has finally stopped buying bonds, for now, but since almost all the new money from QE ended up in excess reserves anyway, QE is and has been irrelevant. Now comes the fun part where excess reserves finally start dropping down and head into the economy through the money supply controlled by bank lending. 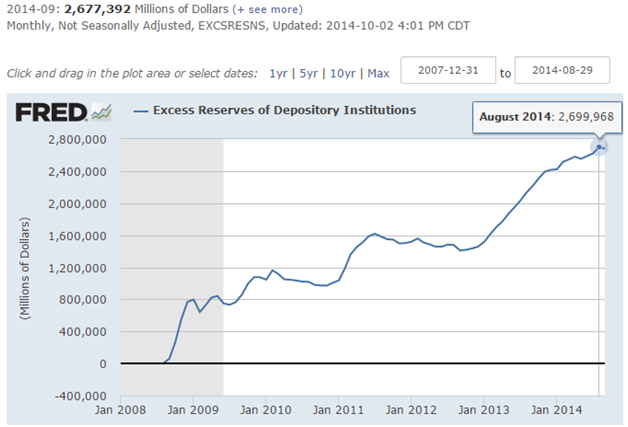 Excess reserves can no longer climb as the Fed has stopped QE, and so far they have dropped from $2.7T in August to $2.67T as of September. The faster they drop, the faster the money supply expands, the faster prices either in the capital goods sector or the consumer sector rise, depending on where the money goes. That number will continue to drop, and it will all be put into the economy sooner or later.

As for our proxy indicator, all signs are that MGM is flashing green. Its latest earnings call showed several indications of strong flows through Las Vegas. Some of the big ones are as follows:

1) Full year convention mix is at an all-time record high of 17% of hotel guests. Convention mix has the double significance of indicating volumes plus a robust business sector. If companies are going to Vegas in big numbers, this is a strong sign of a boom.

2) Though EBITDA for the quarter was down $40M, but this was due to lower table games hold and nonrecurring employee benefit expenses. Meaning, any fall in EBITDA was not due to any falling volumes.

Back here in Las Vegas, we are really encouraged by the trends that we’re seeing. And as you know, October consumer confidence was at a 7-year high. That’s very important for us here in Las Vegas. People, in general, are feeling better with not only job security, the low interest rate environment, declining gas prices, and we’re seeing that reflected in visitation and convention business.

From a broad market perspective, we believe Las Vegas is extremely well positioned. It’s hard to believe now after being in 2009 and ’10, but year-to-date, our visitation is up 4% for Las Vegas and this pace will mean that we’re approaching 41 million visitors by year-end. That, of course, would be a new record for Las Vegas.

All seems good now. The economy has $2.66T of high-powered Fed money to soak up. Prices are falling and casino volumes are rising. But again, at some point, the money will start flowing out of the capital goods sector and into the consumer sector. Judging by the amount of money yet to be absorbed, when that happens, it will not be pretty.

For now, join in the party. There’s a ways to go. But watch for a trend reversal in the MIT Billion Prices Index by checking in on it weekly or even daily, keep your eye on how fast excess reserves are falling, and watch for volume changes at MGM. When price inflation starts to climb fast as excess reserves pour into M2, it will be time to take profits, and move into commodities to protect capital.